The K 2016 trade fair in Düsseldorf from 19 to 26 October 2016 was highly successful for Sesotec GmbH. The target group of plastics manufacturers and processors and visitors from the recycling industry showed great interest in the presented machines and systems for contaminant detection and material sorting. 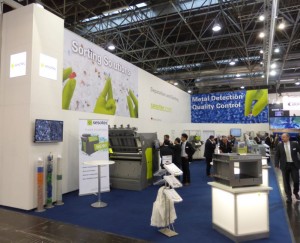 At Sesotec's K trade fair stand visitors also were informed about the benefits of Industry 4.0. Machine data from the contaminant detection process could be observed live. Sesotec CEO Xaver Auer is sure that this digital proof of quality will further advance the increase of efficiency and effectiveness in plastics production and processing.

Sesotec's expectations with regard to frequency and internationality of visitors were clearly exceeded at this year's K trade fair. From Sesotec's point of view the results were very good both with respect to relationships with existing customers from the most important fields of plastics industry and recycling and with respect to the development of new contacts. "For Sesotec this was a highly successful K trade fair", as Key Account Manager Gerhard Kerschhackl and Michael Perl, Head of the Sorting Recycling Business Unit comment unanimously.