With a rotary indexing table, Peiseler is helping to increase the productivity of a well-known German car manufacturer. The Remscheid-based company developed the innovation with its customers UNIOR Special Machines in Slovenia. The rotary indexing table is, so to speak, the centrepiece of a machine tool manufactured there, which will ultimately be used to machine lightweight components for the production of electric cars. "It has a diameter of 3,000 millimetres and weighs ten tonnes," explains Marc Gronau, Sales Manager at Peiseler, "making it the largest and most sophisticated unit of this type that we have ever built in our 200-year company history."

The basis is the worm-wheel-driven Peiseler ATU 1600 index table, which uses a direct path-measuring system to clock six ZATC 300 two-axis swivelling devices in five steps from one machining station to the next and then with a pilgrim step back to the starting position. For this, the rotary indexing table has a total of 13 axes and a maximum load of 250 kilograms per station. They ensure high-precision simultaneous machining of the workpieces.

The Peiseler rotary indexing table is the centre of the whole rotary indexing machine with five stations for drilling and milling as well as a loading and unloading station. "A special requirement for our design was not only to achieve maximum power density for highly dynamic cycle times in the smallest possible installation space," Gronau points out. "In order to keep the ever-present tolerances as low as possible, it was also necessary to position each of the two-axis swivelling devices among themselves with the utmost precision." Another complex task was the media supply for clamping, releasing and monitoring the workpiece clamping device. A rotary distributor with eight channels was used for this.

"Here we have not only built our largest rotary indexing table to date, but also developed a customised solution that ensures short cycle times and low unit costs in the production of electric vehicle components," Gronau is pleased to say. Thanks to the high precision, Peiseler, as a manufacturer of turners, index tables, two-axis swivelling devices, swivel heads and tool changing tables, also has a share in the process-reliable production of future-oriented mobility. 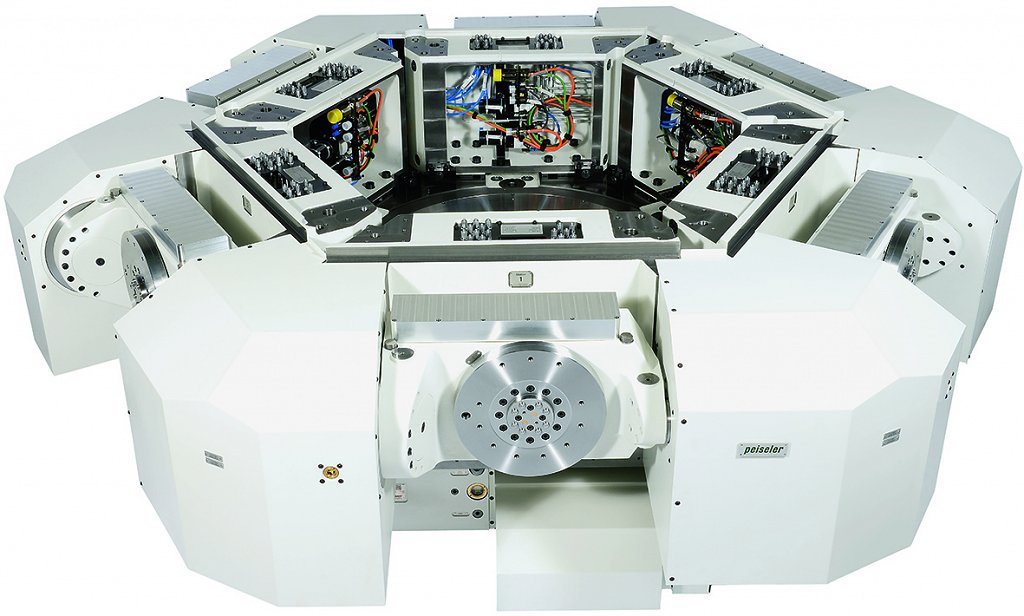 The rotary indexing table from Peiseler has six ZATC 300 two-axis swivelling devices that rotate on the ATU 1600 base table. Photo: Peiseler